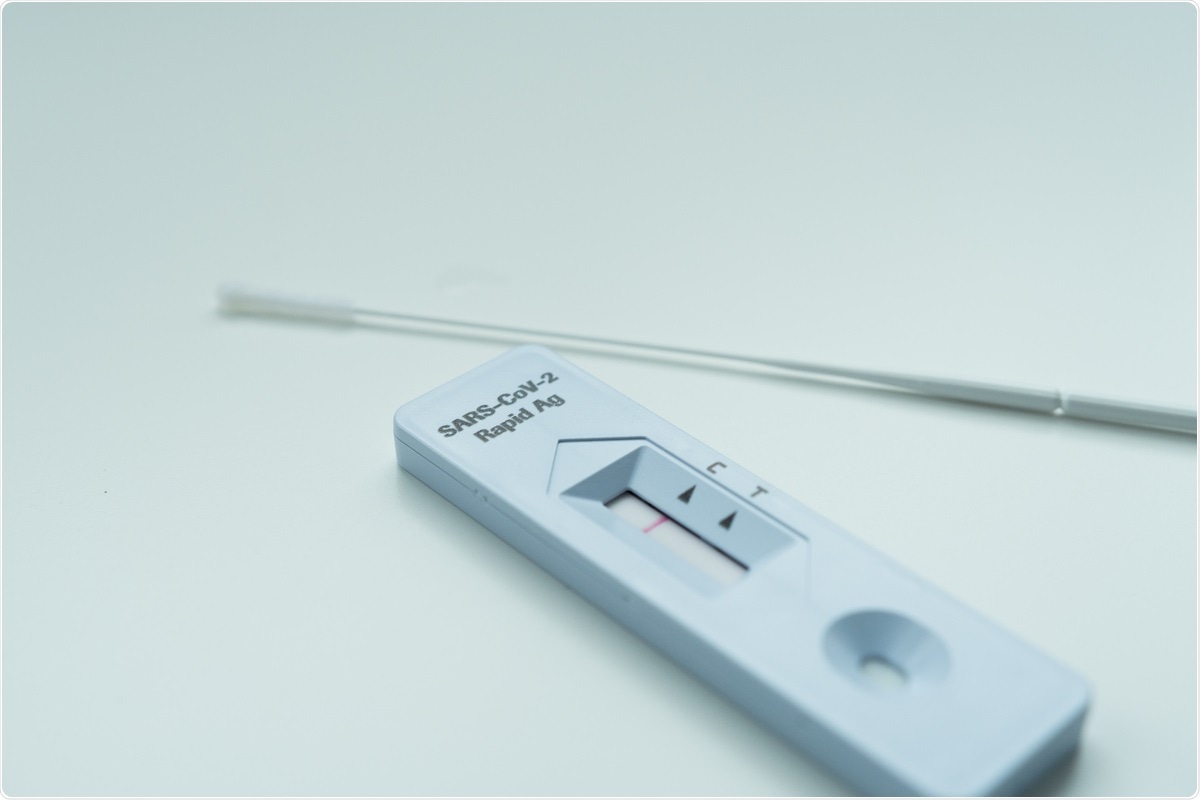 The severe acute respiratory syndrome coronavirus 2 (SARS-CoV-2) has been remarkable for its silent and relentless spread across continents, with a shocking toll on human health, social interactions and economic activity. This is driven by the high proportion of asymptomatic and very mild infections, allowing people to move around and engage in public activity normally.

There are many modeling studies that suggest that large-scale screening for the presence of this virus can help curb transmission at this point, from people with few or no symptoms. A new study, released as a preprint on the medRxiv* server, points out the accuracy of antigen-detection rapid diagnostic tests (Ag-RDTs) for this purpose when used at the point-of-care.

It is already known that these RDTs detect up to 88% of infections in individuals with a high viral load (defined as a positive polymerase chain reaction (PCR) with a cycle threshold below 30). These tests are also specific, and almost 99% of people who test negative are uninfected, indicating a very low false-positive rate.

Moreover, ADTs are easy and convenient and provide rapid results. The combination of these features indicates that these tests are suitable for screening in the context of this pandemic. If universal screening could be put in place using such tests, the spread of the virus could be reduced substantially.

In persons with lower viral loads, the number of false positives could be much higher, especially if the prevalence of SARS-CoV-2 in the population is low. This could diminish the credibility and acceptance of such testing and disturb the testing processes.

In a hospitalized cohort, including many severely ill patients, the number of false negatives could lead to unrecognized transmission, with unnecessary increases in the number of cases, more severe illness and higher mortality. There is little clarity on the success of such population-based screening tactics.

The current study was carried out as part of a universal screening program at Heidelberg University Hospital, Germany, between September 20, 2020, and March 7, 2021. All patients coming in for elective procedures or for any outpatient procedures that require close or prolonged contact with the staff or other patients were screened by an Ag-RDT.

Patients who tested positive were additionally tested by PCR on a nasopharyngeal swab if they were planned to undergo high-aerosol procedures, if they developed symptoms of SARS-CoV-2 infection or if a cluster of cases occurred. All pairs of Ag-RDT and PCRs where the latter was done within five days of screening, along with the PCR cycle threshold, were separately identified.

These were then analyzed for the positive predictive value (PPV) and sensitivity, assuming the PCR result to be the true one.

Of the 220 positive Ag-RDTs from about 27,400 patients without any symptoms of SARS-CoV-2 infection, almost 90% were also tested by PCR.

Approximately 87% of positive Ag-RDTs were true positives, confirmed by PCR, indicating a very high PPV. When a positive PCR was obtained within five days of a positive Ag-RDT, the patient had a high viral load, as shown by a median cycle threshold of 19.

Of those with a negative Ag-RDT result, 94 showed a positive PCR within the next five days. The sensitivity of the Ag-RDT was therefore estimated to be 64%, with the median cycle threshold in the false-negative being 33.

The results of this universal screening program in real life, carried out on asymptomatic patients, show that Ag-RDTs can detect the presence of this infection and thus prevent such cases from transmitting the virus to others in medical facilities.

Only 12% of the 94 false-negative patients had a PCR with a cycle threshold below 25, ten of them being picked up within the next two days. This could indicate that these patients were in the early phase of the disease, with a rapidly increasing viral load, resulting in a negative test.

Only a category of asymptomatic patients was tested, namely, those who were heading for elective procedures or would have a long period of contact with the medical and nursing staff. If all patients were to be tested, the sensitivity might have dropped.

What are the implications?

To the best of our knowledge, this is the first large-scale implementation study of a universal screening program of asymptomatic individuals to analyse the diagnostic yield of Ag-RDTs,” write the researchers.

Despite the limited number of confirmatory tests, the study shows that it is possible to use Ag-RDT for large-scale screening among patients arriving at a hospital for care. It also shows the utility of this test as a public health test in the current pandemic.

This Clinical Guidance (“Guidance”) is provided for informational and educational purposes only. It is intended to offer physicians guidance regarding best practices in caring for and treating patients infected by COVID-19. Adherence to any recommendations included in this Guidance will not ensure successful treatment in every situation. Furthermore, the recommendations contained in this Guidance should not be interpreted as setting a standard of care, or be deemed inclusive of all proper methods of care nor exclusive of other methods of care.